Legal resources are one of the most important areas of needs for many immigrants, regardless of their immigration status. One or more of the following areas may be pertinent to immigrants, depending on their specific legal and family situation.

This program allows certain individuals with unlawful presence in the United States who were brought to the country as children to obtain a renewable two-year period of deferred action from deportation and become eligible for a work permit. Recipients must not have felonies or serious misdemeanors on their records in order to be eligible for DACA. In June of 2020, the Supreme Court ruled in the Trump vs. NAACP (DACA) case on three injunctions, blocking the rescission of the DACA act. The Supreme Court ruled that the reasons for rescinding DACA were arbitrary and capricious under APA. However, there was no ruling on the merits of DACA itself and there are no injunctions preventing the Trump administration from ordering another rescission.

Temporary Protected Status is a status given to nationals of certain countries who are already present in the United States, and that the United States government has deemed as being affected by natural disasters or armed conflicts. Currently, nationals of the following ten countries are eligible for TPS: Haiti, El Salvador, Syria, Nepal, Nicaragua, Honduras, Yemen, Somalia, Sudan, and South Sudan. The countries with the largest number of TPS beneficiaries as of 2017 are El Salvador (195,000), Honduras (57,000), and Haiti (47,000). This program allows beneficiaries to live and work in the US for a limited time. TPS holders must apply for an Employment Authorization in order to be able to work in the US. The US government has let TPS expire (has decided not to renew it) for Honduras, El Salvador, Haiti, Nepal, Sudan, and Nicaragua. However, a number of cases are currently on appeal in federal courts that have stayed the termination of TPS for nationals of Haiti, El Salvador, Nicaragua, Sudan, and Nepal.

Asylum is a status granted to foreign nationals who are arriving at the border or who are already present in the United States and who meet the definition of a refugee. The definition of a refugee is as provided by the United Nations 1951 Convention and 1967 Protocol, and this is defined as anyone who is unable or unwilling to return to their home country and cannot obtain protection in their country due to past persecution or a well-established fear of future persecution based on religion, race, nationality, membership in a particular social group, or political opinion. The United States Refugee Act of 1980 provides two pathways for people to obtain refugee status - 1) from abroad as a resettled refugee; 2) in the United States as an asylum seeker. Once receiving asylum, an individual is protected from deportation to their home country, is authorized to work, can apply for a Social Security card, can request permission to travel overseas, and can petition to bring family members to the United States as well. One year after being granted asylum, beneficiaries can apply for permanent resident status.

The Trump administration has recently been attempting to change policies and laws that relate to asylum seekers. For example, in July 2019, DHS banned all individuals from seeking asylum who had passed through a third country before presenting themselves at the US border without having sought asylum from that third country. This made it impossible for asylum seekers from most countries to present themselves at the US-Mexico border. Later, DHS began seeking cooperative agreements with Guatemala and Honduras to send individuals seeking asylum in the US to a third country, obliging them to seek asylum in that country instead. The legality of these agreements is currently being contested.

F1 Visas allow non-US nationals to come to the United States to study at an academic or a language program. F1 visas are considered non-immigrant visas, which means they do not provide a pathway to citizenship, but rather allow the individual to reside temporarily in the United States until their studies are completed. In order to maintain legal presence in the United States, the F1 visa holder must continually maintain their status as a student. It is permissible to transfer from one institution to another, or to change programs from a language learning program (English as a Second Language) to an academic program.

Students are expected to possess funds to be able to cover their educational and living expenses for the duration of their stay in the United States. If the student does not have enough personal funds, they must find a sponsor who can sign an affidavit and provide a bank statement attesting that they have enough funds to support the student and that they intend to cover the student's expenses. Another alternative is that students can apply for a scholarship to help them cover some or all of their costs.

Students are not allowed to work off campus during their studies, and they can only work on campus for a maximum of 20 hours per week. In some cases, students can apply for and receive Curricular Practical Training (CPT), which enables the student to complete a paid or unpaid internship or job during their studies, as long as it is directly related to their program of study. There is also the possibility of receiving Optional Practical Training (OPT), which permits up to full-time work off-campus either during or upon completion of studies. Normally, OPT can only last up to 12 months, but students in certain science, technology, engineering and mathematics (STEM) fields can apply for a 24-month extension of OPT if they wait until the end of their program of study. Note that working for 12 months under CPT makes one ineligible to participate in OPT.

Eligible individuals can apply for permanent residency in the United States, often referred to as a "Green Card", by filing Form I-485 - Application to Register Permanent Residence or Adjust Status with USCIS. Once USCIS reviews the application, they schedule an interview with the applicant. If permanent residency is granted, it will be valid for 10 years. To be eligible to apply, individuals must qualify for a green card through family, employment, as a special immigrant, through refugee or asylee status, for human trafficking and crime victims, for victims of abuse, through other categories, or through registry. More detailed information on each category of eligibility is available on the USCIS website. 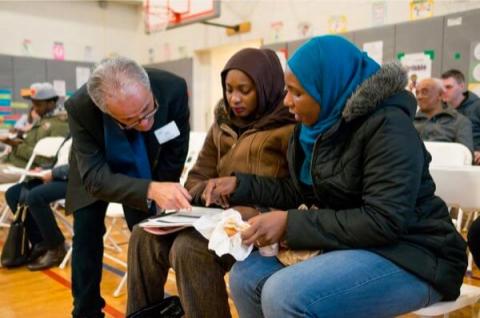 Eligible individuals can apply for US citizenship through the following steps:

To be eligible for US citizenship, you must be at least 18 years old and have had permanent residency status for at least 5 years (or at least 3 years if you are married to a US citizen) and meet other eligibility requirements. More detailed information about these requirements can be found on the USCIS website.

Knowing and Advocating for your Rights

One of the most important things immigrants can do, regardless of their status in the United States, is to educate themselves on their rights. Knowing your rights will enable you to more effectively advocate for yourself and your rights. For example, in any encounters with law enforcement, including police and immigration officials, you have the right to remain silent and refrain from discussing anything about your immigration status. It is also a good idea to carry your papers with you at all times if you are over 18 years of age. Many organizations provide comprehensive information about knowing and advocating for your rights, including the American Civil Liberties Union (ACLU). More resources are available through the Navigator Platform.

Please check out the Navigator Platform to find resources and information that could be helpful to you based on your needs and your specific situation.